Day 7  – Ramadan Day 1 – Time to head home. But not before some last minute exploration 🙂 If you’ve travelled half-way around the world and blown your budget, might as well see all there is to see before coming home. You’d not think it, but after 6 days, we still hadn’t seen Aotea Square – we suspected we’d coming pretty close but couldn’t be sure. I was tempted with the promise of ice-skating and so we prepared to head out in the last ostensible direction left to us. Not before figuring out how to send out my post-cards of course. I still can’t believe I left it to the last day but thanks to the wonderful concierge and the convenience store right across the lobby, I was able to send out all my postcards after breakfast. While getting stamps, we realized that said convenience store across the lobby actually had some pretty funky last-minute souvenirs too! Why we didn’t look here earlier, I’m not quite sure. We thought it would probably be more expensive, since it was pretty much in the hotel, but we were pleasantly surprised to discover that it wasn’t. We left the hotel in a good mood and finally spotted the first sign of Aotea Square – Town Hall!

I spy with my little eye…

We didn’t know it then, but figured out as we walked past the Town Hall, that it had been converted into a performance hall. The musicians streaming in and out lugging their instruments was a dead giveaway ^^ Outside Town Hall, you’ll come across Auckland’s First World War Heritage Trail which makes for interesting, albeit sad, reading. We walked on and finally stumbled across the ice-rink which was sadly not open…we had come at a rather unearthly early hour. Right across the rink though was a landmark that had quite escaped our notice – Aotea Centre.

If you’re interested in the arts, the Aotea Centre is the right place for you to go, with performances, exhibitions – it really does it all. We managed to see the Red Earth exhibit.

This was one of the more upbeat of Private Roy’s diary entries. I think that makes me all the more depressed.

We wandered out of the centre, and came across… polar bears! Now this is my kind of art… the hands-on assembly required 3D kind… I felt right at home! 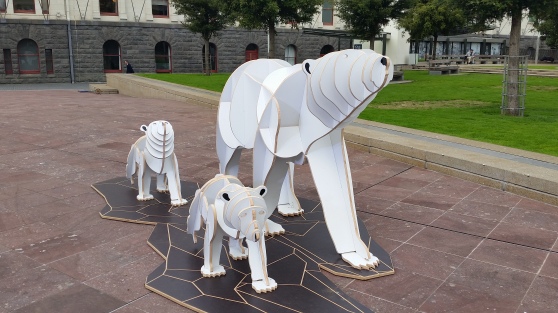 Wrong pole I’m afraid, you need to be headed north!

Our next stop was…the Aotea souvenir shop… we decided to do all things Aotea that morning. It’s a big shop, about as big as the OK Gift Shop which meant we spent a considerable amount of time wandering about and deciding what would make the perfect thing to take home. We finally decided on the Paua shell version of the Maori symbols of Koru, Matau and Pikorua. By 12 o’clock we were back at the hotel and ready to be picked up by Selwyn. As we waited, our helpful as ever concierge, told us not to worry too much about lunch as you could always pick up lunch at the airport. She highly recommended the burgers from Burger King, advised us to pack some to eat on the plane (that says a lot about airplane food doesn’t it) but also advised us not to use her burger ratio of 2.5 off the plane and 2.5 on the plane. Sound advice…

The drive to the airport was as cheerful as the drive from the airport had been. Selwyn was a lovely old chatty grandfather who entertained us with stories of his wife and 6 kids, his love of cars and the new British-run jail in Auckland. There was another thing we spoke about. And that was the news I had seen posted at Ronnie’s Cafe , someone wearing a turban had been banned entry into a club. Selwyn was upset, he said it would probably escalate to race relations. It was a really shame.

We said good-bye, and at the airport quickly moved our honey from our hand luggage to our baggage which was going to be checked-in. I’m not entirely sure why this rule exists but anyway… no honey in your hand luggage! We checked-in easily enough and then spent our time wandering around the duty-free wondering why it was so easy for us to buy things for others but not be willing to spend on ourselves. We found our way to the five burger Burger King but opted for crisps instead which the Japanese lady gave us at a lower price because we had no change and she didn’t want any big notes… this is I realize a universal dilemma.

I was sad to be leaving behind all the amazing people we had met… and yes… they had all been amazing. From 63C who wouldn’t even turn left as he slept, to R who checked us in and then checked up on us. From the concierge who booked all our tours, to the guys at Aria who remembered our breakfast order out of hundreds of guests. From the convenience store guy who gave us a great tip on how to maximize our phone balance, to room service who always came in with the biggest smiles. From our amazing guides with their crazy jokes, to silent Nate who consistently walked behind the ladies on every slope. From M who I only met for a few hours and who wished me all the best for my presentation, to Y for words of reassurance. From our airport pickup who showed us him home, to Prof. J’s wife who shared her life story. I’ve truly been blessed to have met such great people in such a short time. The flight back home was no different. An Australian gentlemen took 63C’s place on the flight to Brisbane and he was nice enough to help us with our luggage without being asked. In the transit lounge we met a lovely 75 year old lady ready to take the remaining three of five flights to get her from her home in New Zealand to see her daughter in the UK… a feat she accomplishes twice a year. And there I was thinking 20 hours was plenty of time to spending on a plane. We chitchatted about her family, her grandson and her aversion of spiders. She helpfully pointed out that spiders don’t like the noise so that’s one way to get rid of them. Point duly noted but I hope this is advice I never have an opportunity to act on. She gave us some great suggestions on where to go if we ever get a chance to come back to New Zealand… Arrowtown  in the South Island is a place I’d definitely like to go… And last but now the least, we had the company of an elderly lady all the way to Dubai who was most memorable for not having used the toilet for almost 16 hours. A true feat…