We had to wake up super early to get ready for the trip to Fuji, which takes about 2 hours to get to from our hotel by bus. Armed with an extra set of clothes and our sweaters in anticipation of the freezing ice cave, we finally left at about 9am.

The road to Fuji is simply breathtaking. I do wish that the road barriers were clear though so you could enjoy an uninterrupted view but the scenery was just splendid nonetheless, dotted with colourful houses some sporting their own solar panels.

We were all pretty exhausted from the day before, and most of us ended up drifting off in the bus but I woke up just when things were getting interesting- our guide started handing out sheets of Origami paper. She was going to show us how to make Mt. Fuji. ^^ With plenty of Origami paper at hand, I was all set to amuse myself during the long bus ride, but our guide was really well-prepared and kept us all awake by telling us the traditional Japanese story of the Moon Princess. The story was complete with pictures and all. I told you she was well-prepared! 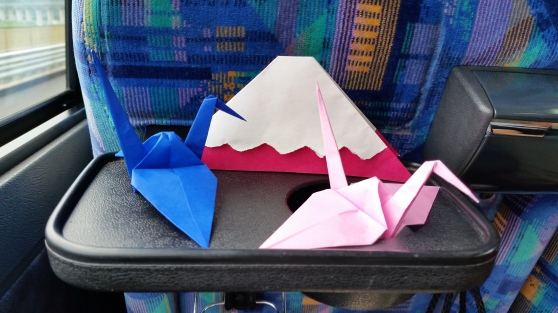 A pink Mt Fuji and some paper cranes ^^

The story is called The Tale of the Bamboo Cutter and goes something like this. An old childless bamboo cutter finds a shining bamboo in the middle of the forest inside of which he discovers a tiny baby girl. He takes her home to his wife and in just three months, the baby grows up. The bamboo cutter discovers that since finding the baby every stalk of bamboo he cuts contains a gold nugget which means that the family now becomes wealthy as well. The girl has grown to be a beauty and princes from around the land come to ask for her hand in marriage, but none of them are able to bring back items she requests which are her condition for getting married. The Emperor too has fallen in love with the girl but his offers are also rejected. One day her parents find her looking at the moon and crying. She tells them that she is not of the earth and was sent to protect her during a war and that it is now time for her to return to her people. Loth to see her go, the emperor and her parents set guards around the house to stop her from being taken by force by the people who will descend from the moon. Unfortunately, all the guards are paralyzed by the light of the moon and the princess leaves but not before sending an elixir of eternal life to the emperor. The emperor, on finding out that she has left, declares that he has no use for eternal life if he cannot spend it with her so he sends his men to point closest to the heavens, the top of Mt. Fuji, where they are to burn her letter and the elixir. And so they burn the letter and elixir and the smoke from this fire is said to be the smoke that can still be seen at the top of Fuji today.

Thumbelina meets Roswell meets… I can’t quite place the ending ^^ Our guide then told us a bit more about Mt. Fuji and its status as an active volcano which last erupted about 300 yrs ago. And so, equipped with some fact and some fiction, we reached the Nurasawa Ice Cave. Being a cave, there are areas where we would have to pretty much be on our hands and knees but we were all eager and ready to go in. Most of us opted to forgo the rubber boots and hard hats though they’re provided at the entrance for free to ensure a safe bump-free walk. At the entrance of the ice -cave itself we could feel the blast of icy air welcome us. It was unreal to be sweating in the humidity one minute and rubbing our frozen fingers, cold from holding on to the bamboo railing, the next. The descent is by no means difficult but it’s important to keep watching your head and not slip on the stairs. There was ice everywhere, as expected of an ice cave, and we came to a consensus that the best way to spend our time in the ice cave would be with a hot cup of karak. Our glasses fogged as we clambered out and we were ready to go back in ^^

From the ice cave we took a walk through the forest, also known as the Suicide Forest, to reach the wind cave. The forest is a place that a lot of people come to to commit suicide, we were told, and it’s not exactly difficult either because it’s very easy to get lost there. With that in mind, we kept in a group careful not to get lost. 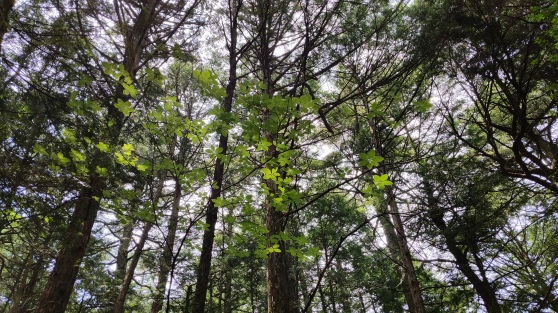 Looking up at the canopy

The path were we walked was in fact a magma trail from the last eruption, so all along the forest edges we could see how life had recovered after the eruption. There are huge holes in the ground, no one knows how deep, trees bent from the force of the magma, and trees that have managed to grow from a mere 10cm of soil on protruding rock. The things we saw showed us the true meaning of resiliency. The forest was rich with life, insects and mushrooms all doing their part to return the dead trees and leaves back to the soil. It was a friendly reminder of the reality of life- ashes to ashes, dust to dust. 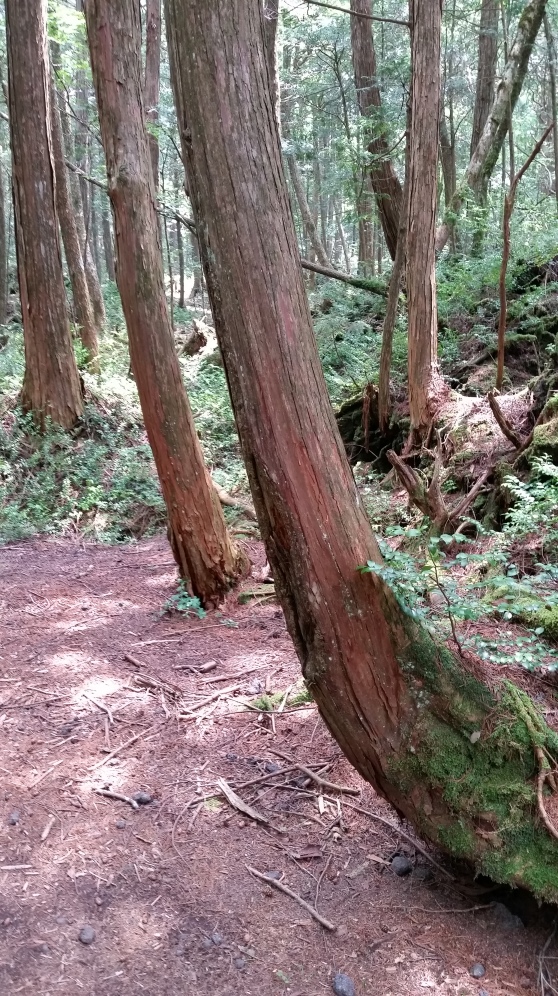 Trees growing at a slant

We eventually reached the Fuketsu Wind Cave, one of over 80 caves at Mt. Fuji. The entrance to the wind cave was pretty much as cold as the ice cave and I had to layer up again as we watched the mercury plummet on the thermometer. Unlike the ice cave though, the cave is a simple slope and as we went in we saw what used to be refrigerators back in the day- wooden crates filled with seeds and silkworm larvae. On the walls of the cave was a shiny moss, glittering when light shone upon it. Regular green moss has also started covering the walls, but that’s because of the artificial lights that have been introduced in the cave to guide tourists.

Emerging from the cave

With our trip down the caves complete, we headed to the souvenir shop, where since we had collected our stamps, we were gifted free postcards. Outside the souvenir shop is another shop that sells, interestingly enough corn flavoured ice-cream! Sound strange? Well, it didn’t taste so strange according to everyone who attempted it. I am now determined to come back to Japan when my stomach is more cooperative.

We headed off from the base of Fuji for lunch at the Aladdin Indo restaurant which is an Indo Pak restaurant as evidenced by the flags outside and the staff who were from both India and Pakistan. This has further reinforced my belief that outside our own countries we are united under the “desi” banner. This lunch would prove to be one of the yummiest lunches on the trip, filled with butter chicken and melt-in-your-mouth naan and mango lassi, followed by a much needed masala chai.

After a filling lunch, we then headed to the Fuji Hakone National Park to see Lake Kawaguchi.